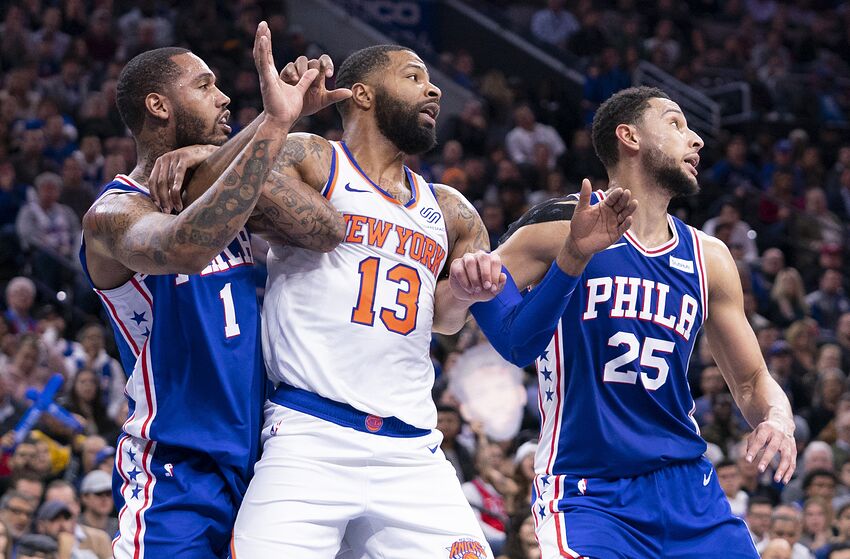 PHILADELPHIA, PA - NOVEMBER 20: Mike Scott #1 and Ben Simmons #25 of the Philadelphia 76ers box out Marcus Morris Sr. #13 of the New York Knicks at the Wells Fargo Center on November 20, 2019 in Philadelphia, Pennsylvania. NOTE TO USER: User expressly acknowledges and agrees that, by downloading and/or using this photograph, user is consenting to the terms and conditions of the Getty Images License Agreement. (Photo by Mitchell Leff/Getty Images)

Marcus Morris was never supposed to be a New York Knicks player. The journeyman forward had a verbal agreement on a two-year contract with the San Antonio Spurs, before pulling a DeAndre Jordan and pulling out of the deal at the eleventh hour.

Enticed by the allure of playing in the Mecca, Morris signed a one year deal with New York where he has been granted the offensive freedom to average a career-high 19 points per game. The Knicks’ lack of established shot creators has forced Morris to become the team’s primary scorer, and therefore his trade value has likely never been higher.

The Knicks are currently seven games out of the Eastern Conference’s eighth seed, and therefore the NBA Draft Lottery unsurprisingly appears more likely than a return to postseason relevance.

The Knicks’ logical course of action would, therefore, be to evaluate which of their players will be capable of contributing when the team returns to contention. A thirty-year-old on an expiring contract, no matter how valuable he may currently be, is not a future building block. Failing to trade Morris for a first-round draft pick, an asset that can undoubtedly boost the Knicks‘ lengthy rebuild, is unforgivable.

Look, I love Mook as much as the next frustrated Knicks fan, his crafty footwork, and isolation heavy game, as well as his commitment to New York, are reminiscent of Carmelo Anthony.

Morris has served as a steadying veteran presence to a squad in desperate need of leadership, yet his value to the Knicks is now solely reliant on his trade return. Reports of the Knicks front office leaning towards keeping Morris on the roster beyond the trade deadline are likely little more than speculation, yet if true should mark the end of Steve Mills and Scott Perry’s employment as decision-makers in any capacity.

Playoff contenders — the Philadelphia 76ers and Los Angeles Clippers — have shown interest in Morris according to Marc Berman of the New York Post, and his skill set fits the mold of essentially every team hoping to be playing into May.

In a league where versatile wings are more valuable than ever, Morris is worth a first-round pick, and the Knicks would be fools not to take it.